THE PROPHECY OF SHADOWS

Nicole Cassidy is a witch descended from the Greek gods… but she doesn’t know it until she moves to a new town and discovers a dangerous world of magic and monsters that she never knew existed.

When the Olympian Comet shoots through the sky for the first time in three thousand years, Nicole and four others — including mysterious bad-boy Blake — are gifted with elemental powers. But the comet has another effect — it opens the portal to another dimension that has imprisoned the Titans for centuries. After an ancient monster escapes, it’s up to Nicole and the others to follow a cryptic prophecy in time to save the town… and possibly the world.

THE BLOOD OF THE HYDRA

A demigod who can kill with a touch. It’s an ability that must be kept secret from everyone—even from those trusted most.

Now Nicole, Blake, and the three others with elemental powers must journey abroad to stop a series of monsters that they previously believed to be dead from rising once again and destroying the mortal world. Will they all survive the quest? And how long will it be until Nicole is forced to use her ability to kill in front of everyone, revealing the true darkness of her powers? Check out daisyslots for the latest online casino games.

Find out in The Blood of the Hydra, and join the Elementals on their mission to save the world – or die trying.

THE HEAD OF MEDUSA 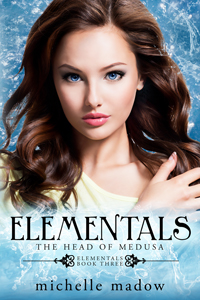 The epic story of witches, gods, and monsters that USA Today called a “must read” continues in the third book of the Elementals series!

When Nicole Cassidy moved to a new town, she discovered that she was a witch descended from gods. But that was nothing compared to learning that it was up to her and four others with mysterious elemental powers to help save the world from the Titans, who would soon return to Earth.

Now her relationship with Blake — the fire Elemental — is finally heating up. But she must remain focused, because Typhon, one of the deadliest creatures in history, has escaped from the weakening prison world. Only one object can destroy him — the head of Medusa herself.

Follow the Elementals as they journey to the end of the Earth, facing choices that will put their lives and the entire world at risk. Will they all survive the mission? Find out in the riveting third book in the Elementals series, The Head of Medusa.

THE PORTAL TO KERBEROS 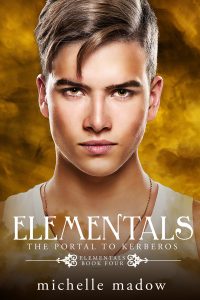 She will venture into hell to save the one she loves.

After being betrayed by one of their own, Nicole watches helplessly as Blake is snatched into the prison world of Kerberos—along with Medusa’s head, which is the one item they need to stop the Titans from rising again. Now Nicole and the other Elementals must enter the portal, find Blake, and bring him and Medusa’s head back to Earth before the deadly monster Typhon returns and wreaks havoc on the world. But there’s one catch—their elemental powers don’t work in Kerberos. In a dimension designed to make those within it lose touch with reality, and that’s filled with dangerous creatures who want to stop them from completing their task, will they make it out alive?

In this penultimate book of Nicole’s story, join the Elementals as they journey through hell to save the world… before it’s too late.

THE HANDS OF TIME 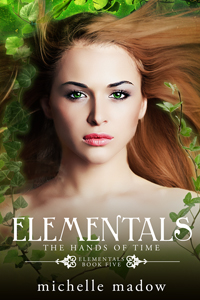 Time is running out. War will be waged. Sacrifices will be made.

Months ago, Nicole Cassidy’s life was turned upside-down when she discovered that she was a witch descended from the Greek gods. She and the four other witches gifted with elemental powers fought all over the world—and in another dimension—to battle the supporters of the Titans and fight for the people they love.

Now the Elementals must stop Typhon—the most dangerous monster in the world—from rising, and seal the portal to the dangerous prison world of Kerberos. But they won’t be able to do that without facing their hardest decision yet… a sacrifice so great that it may be one they’re not willing to make.

Get ready for the stunning, action-packed conclusion to the bestselling Elementals series, with twists and turns that you’ll never see coming!

The Wrath of the Fury

Everything changed on the night of the Olympian Comet.

I’ve always known that I’m a witch. But I didn’t expect to discover that I have a mysterious power unheard of amongst my kind. My best friend Garrett — who I’ve secretly been wanting to become more than a friend — has one of these powers too.

We know something big is going on. But we didn’t realize that there are ancient creatures searching for us, and that they’ll kill us for what we are…

Fill out the form below to get The Wrath of the Fury delivered straight to your inbox for FREE!

The Wrath of the Fury

Fill out the form to get your free copy of Elementals: The Wrath of the Fury delivered straight to your inbox!

Success! Now check your email to read the short story. (If you can't find it, check your spam/promotions inbox, in case it accidentally got sent there.)