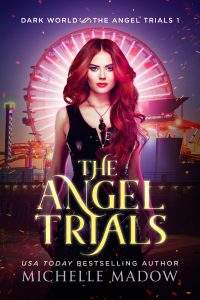 She thought magic didn’t exist. She was so, so wrong.

Raven Danvers is a typical college student… until she’s attacked by a demon on the night of her twenty-first birthday. Luckily, she’s saved by Noah—a mysterious, sexy wolf shifter who appears and disappears in the blink of an eye.

When Raven returns home, she discovers her mom has been abducted by the same demon who came after her. And who turns up at the scene of the crime again? Noah. He’s hunting the demons who are taking humans, and he’s ultimately heading to the place where Raven needs to go to save her mom—the mystical island of Avalon.

Now Raven’s tagging along on Noah’s demon hunting mission whether he wants her there or not. And he makes it no secret that his journey would be a lot easier without her dragging him down. But Raven isn’t going anywhere, so she and Noah will have to learn to work together—if they don’t kill each other first.

Get ready for a romantic, action-packed adventure in The Angel Trials, the first book in a thrilling urban fantasy series that fans of Shadowhunters and Supernatural will love! 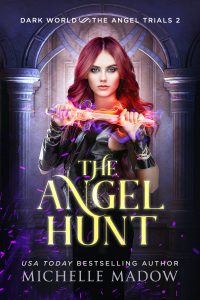 The hunt for demons is about to heat up.

Somehow Raven has convinced Noah and Sage—the two wolf shifters who saved her from a demon attack—to let her tag along on their quest to kill ten demons. The payoff for completing the mission? Entrance to the mystical island of Avalon, where Raven will go through trials to gain the strength she needs to save her mom’s life.

Raven wants to help the shifters on their quest. But Noah refuses to put her in any danger—which makes no sense, since he hates her. At least she thinks he hates her… until he catches her off guard and kisses her. Suddenly they’re connected in ways she doesn’t understand, and she feels closer to him than ever.

If she didn’t know any better, she’d think they imprinted on each other. But that’s impossible. Because shifters can’t imprint on humans.

And if they did imprint on each other, then the supernatural world is changing—and Raven’s right in the center of it.

Emotions will flare between Raven and Noah in the second book in The Angel Trials series, an urban fantasy adventure with romance, magic, and twists that will keep you reading long into the night! 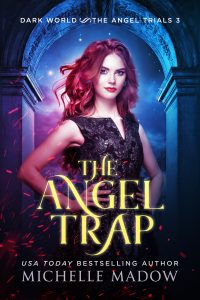 Be careful who you trust, or you might walk into a trap.

After putting her neck on the line to save Noah and Sage’s lives, Raven is on the brink of death. The only thing that might save her? Vampire blood.

The problem is, no one’s supposed to know that vampire blood can heal humans. Anyone who finds out will be silenced. Which means Sage and Noah need to take Raven to a vampire they can trust. But shifters don’t normally trust vampires, so they only know one vampire who fits in that category.

Thomas Bettencourt is a vampire prince who rules an elite coven in Chicago. And thanks to his secret history with Sage, he might be willing to save Raven’s life. But only if they agree to his conditions.

Now they have two choices—work with Thomas, or let Raven die. And after imprinting on Raven, Noah will do whatever it takes to make sure she survives.

Even if that means making a deal with a vampire. 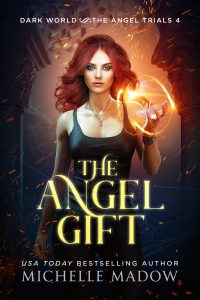 Everyone is separated, and no one is safe.

Raven Danvers didn’t think her life could get any crazier since the night a demon attacked her in an alley and abducted her mom.

Because now that same demon has abducted her too. He’s thrown her into a secret bunker with a group of humans who have unique abilities that make them “gifted.” They don’t know what the demons want with them, and the bunker is impossible to escape.

Her only hope is Noah—the wolf shifter she’s imprinted upon. She just needs to let him know where she is. But she can’t do it alone. Her only way to get a message to him is to team up with the other humans by making use of their unique gifts.

But they have to do it fast. Because their time in the bunker is temporary. The demons are prepping them to go somewhere else… somewhere far worse than where they are now.

They don’t know what this place is.

They just know they really, really don’t want to find out.

Get ready for a magical, twist-filled ride in the fourth installment of The Angel Trials series, a fast-paced urban fantasy adventure that will leave you on the edge of your seat wanting more! 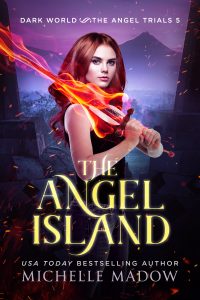 The journey to Avalon is full of trials, and not everyone who ventures there is welcome.

After escaping the bunker where she was held captive by demons, Raven’s finally safe with Noah, the wolf shifter she imprinted upon. And they saved all the other prisoners in the process.

Their next destination? The mythical island of Avalon. There, Raven will enter the Angel Trials so she can become a Nephilim and help fight in the war against the demons.

But it turns out the trials don’t start on the island. They start before it. Because only the worthy are allowed entrance to Avalon.

Many challenges await. Challenges that will separate every person in their group, push them harder than they imagined possible, and force them to make insanely difficult decisions.

Find out in The Angel Island, a magical urban fantasy adventure with twists and turns you’ll never see coming! 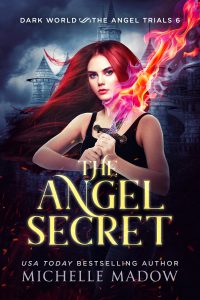 Welcome to Avalon Academy—where supernaturals train, and only the strong survive.

After a long journey across the country, Raven has finally made it to the hidden island of Avalon. But she can’t rest yet. Because she still needs to enter the Angel Trials, become a Nephilim, and save her mom from the greater demon holding her hostage.

She knew the Angel Trials were going to be hard. But nothing could prepare her for what she learns when she gets to Avalon. Because the leader of the island—the Earth Angel—has been keeping a secret.

A secret so devastating it could ruin all hope of the supernaturals ever winning the war against the demons.

Get ready for more twists and turns in The Angel Secret, the sixth book in the addicting Dark World: The Angel Trials urban fantasy series! 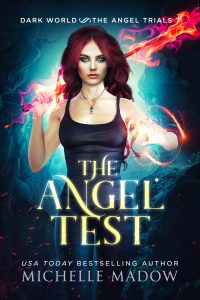 It’s time for Raven Danvers to face the Angel Trials.

After months of training, Raven’s finally ready to compete in the Angel Trials. If she succeeds, she’ll earn the right to drink angel blood from the Holy Grail, which will give her Nephilim blood.

No human has yet to drink angel blood from the Grail and survive. But Raven’s gift of stubbornness makes her special. She survived countless times during the cross country demon hunt with her shifter soul mate Noah, even though she should have died.

Because the greater demon Azazel is holding Raven’s mom and best friend Sage hostage. To free them, she has to kill Azazel. She can only do that if she’s a Nephilim.

So that’s exactly what Raven plans on becoming.

Get ready for more magic, romance, and twists in The Angel Test, the EPIC conclusion to The Angel Trials urban fantasy series by USA Today bestselling author Michelle Madow!