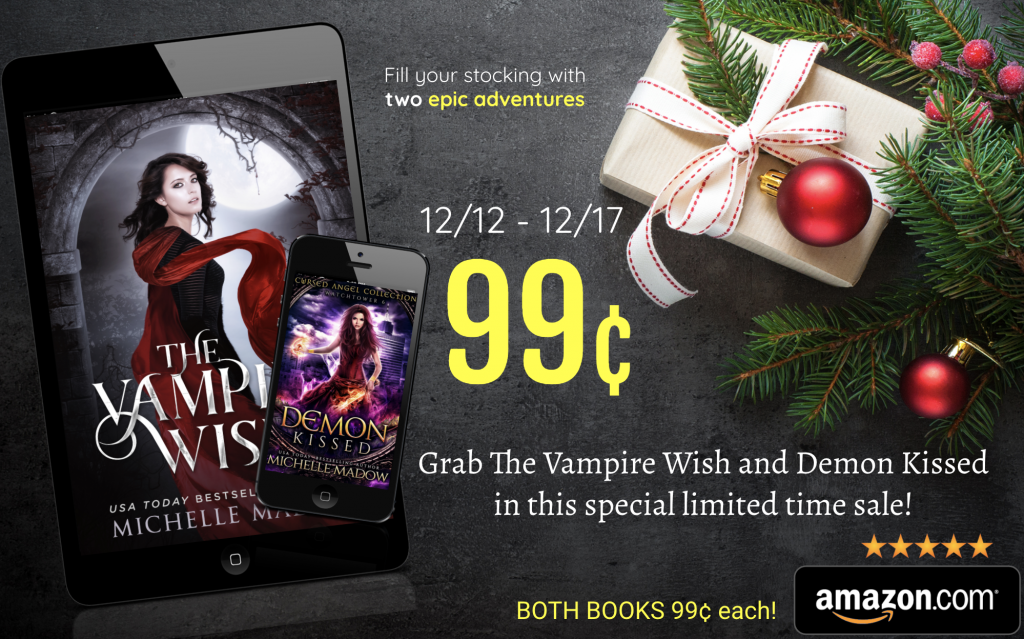 To celebrate the winter holidays, I’ve made both The Vampire Wish (Dark World: The Vampire Wish 1) and Demon Kissed 99¢ from December 12-17 in the Amazon US and Amazon UK stores! Both books, like all my fantasy books, are also available to read for free if you’re a Kindle Unlimited subscriber.

Scroll down to read more about each book, and to grab them for 99¢ for a limited time! 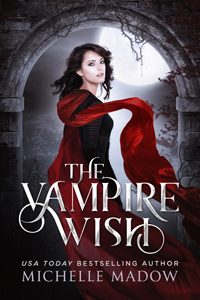 He’s a vampire prince. She’s a human blood slave. They should be enemies… but uniting might be their only hope to prevent a supernatural war.

Annika never thought of herself as weak—until vampires murdered her parents and kidnapped her from our world to the hidden vampire kingdom of the Vale.

As a brand new blood slave, Annika must learn to survive her dangerous new circumstances… or face imminent death from the wolves prowling the Vale’s enchanted walls. But a dark magic is rising outside the kingdom, and when a handsome vampire prince disguised as a human steps into her life, Annika discovers that falling for the enemy is sometimes too tempting to resist.

Especially when becoming a vampire might be her only chance to gain the strength she needs to escape the Vale.

Enter the magical world of the Vale in The Vampire Wish, the first book in a romantic, action packed series that fans of The Vampire Diaries and A Shade of Vampire will love!

Grab The Vampire Wish on Amazon for 99¢ ➜ CLICK HERE 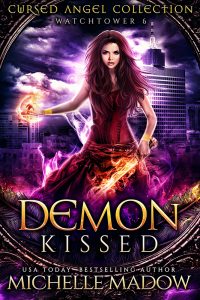 She’s an angel sent to Earth to kill a demon. The last thing she expected was to fall in love with him.

Decades ago, the Demon King Ezekiel conquered Mexico City and cursed it with greed. The only way to end the curse? An angel needs to slay Ezekiel with Uriel’s Flaming Sword.

But Ezekiel has stolen the Sword and hidden it in his Watchtower — the gleaming skyscraper where he lives and rules. Now the angel Rebekah has been chosen to enter the city, find the Sword, and kill the demon. When Ezekiel opens auditions for women to live in the Watchtower as his concubines, it’s the perfect opportunity for Rebekah to get close to the devilishly handsome demon king, locate the Sword, and use it to end the curse.

Except that while Rebekah’s in the city, she’ll be cursed with greed, like everyone else. She must conquer the curse and complete her mission. But that’s harder than it sounds when she discovers there’s one thing she’s greedy for above all else… love from the Demon King himself.

Demon Kissed is THE perfect book for fans of The Hunger Games, Supernatural, and The Bachelor!