michellemadow Posted on May 8, 2015 Posted in Blog 4 Comments

Since Free Book Friday has been doing so well, I’ve decided to continue doing this feature every week, but instead of highlighting my books, I’ll be highlighting books that I’ve read and loved, so I can spread my love of these books to my followers!

Rogue, the second book in Julie Kagawa’s fantastic Talon series, released last week, and since it’s my current read (and I’m LOVING it), I decided to feature the series in my Free Book Friday this week! I love all of Julie’s books (if you haven’t read her Iron Fey or Blood of Eden series, what are you waiting for?!) and the Talon series is another example of Julie’s incredible talent for character and world-building. When I was an aspiring author, Julie was (and still is!) an author I look up to greatly, and I’m so honored to now be able to call her a friend as well 🙂

About Talon and Rogue 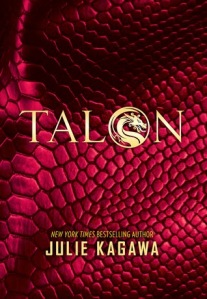 Long ago, dragons were hunted to near extinction by the Order of St. George, a legendary society of dragon slayers. Hiding in human form and growing their numbers in secret, the dragons of Talon have become strong and cunning, and they’re positioned to take over the world with humans none the wiser.

Ember and Dante Hill are the only sister and brother known to dragonkind. Trained to infiltrate society, Ember wants to live the teen experience and enjoy a summer of freedom before taking her destined place in Talon. But destiny is a matter of perspective, and a rogue dragon will soon challenge everything Ember has been taught. As Ember struggles to accept her future, she and her brother are hunted by the Order of St. George.

Soldier Garret Xavier Sebastian has a mission to seek and destroy all dragons, and Talon’s newest recruits in particular. But he cannot kill unless he is certain he has found his prey: and nothing is certain about Ember Hill. Faced with Ember’s bravery, confidence and all-too-human desires, Garret begins to question everything that the Order has ingrained in him: and what he might be willing to give up to find the truth about dragons.

Ember Hill left the dragon organization Talon to take her chances with rebel dragon Cobalt and his crew of rogues. But Ember can’t forget the sacrifice made for her by the human boy who could have killed her—Garret Xavier Sebastian, a soldier of the dragonslaying Order of St. George, the boy who saved her from a Talon assassin, knowing that by doing so, he’d signed his own death warrant.

Determined to save Garret from execution, Ember must convince Cobalt to help her break into the Order’s headquarters. With assassins after them and Ember’s own brother helping Talon with the hunt, the rogues find an unexpected ally in Garret and a new perspective on the underground battle between Talon and St. George.

A reckoning is brewing and the secrets hidden by both sides are shocking and deadly. Soon Ember must decide: Should she retreat to fight another day…or start an all-out war?